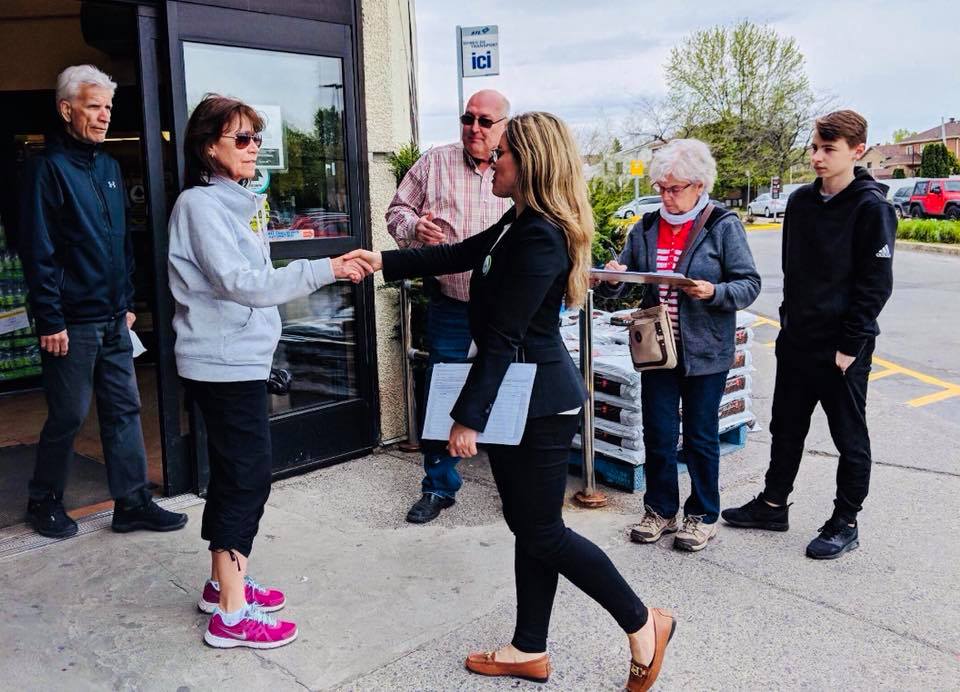 MEASURES FOR RELAUNCHING THE DEMOCRATIC PARTICIPATION

In Québec, the population has shown a general tendency  to be less interested in the provincial elections. It has resulted in a decline in participation in the elections and a general disinterest in political news. It is our duty to ensure that the situation changes and that the tendency is reversed. Here are some of our propositions.

Having to be physically present to cast your vote can pose an additional constraint to democratic participation. In a society where internet is so present in our lives, it is only natural that online voting should be accessible. We believe that the General Election Director should allow a pilot project that would allow advance polls online. It would significantly reduce the amount of voting fraud and counting errors. Citizens who were not able to vote online would still have the option to vote at polling stations on the election day.

Environmental, social and political issues are affecting today's youth more than ever. The policies adopted by the government strongly influence their lives. On the other hand, they tend not to vote on election day. To counter this phenomenon, the Green Party of Quebec proposes to lower the minimum age for voting at 16 years. Young people could vote before leaving high school, which would increase their interest in politics and encourage greater voter turnout in the present and the future.

REGISTER THE DAY OF THE VOTE

Currently, in Quebec, people who wish to vote must ensure that they are registered on the list of electors approximately two weeks before polling day. This practice disadvantages people who have recently moved and young people, who are less likely to exercise their democratic rights. In federal elections, electors can register to vote on polling day. We propose to apply this practice in provincial elections.

REFERENDUMS AND PETITIONS FOR BY-ELECTIONS

Several jurisdictions (as in the United States, Switzerland and other countries where semi-direct democracy is exercised) allow referenda of popular initiatives to be held following the receipt of a number of signatures. . We propose the implementation of this model in Quebec for referendum questions, with the exception of those dealing with the independence of Quebec, which should have the support of the majority of the National Assembly. We are also proposing to allow citizens to call for new elections for MPs following the filing of a large number of signatures from constituents living in that riding.

Currently, in Quebec, election results are reported based on "valid votes". In other words, the state does not differentiate between rejected ballots and blank ballots. Voters should have the right to vote for "none of these candidates" and these numbers should be reflected in the official voting results.

One of the most effective tools for increasing voter turnout is to reward those who do their civic duty. To do this, the Green Party of Quebec proposes to grant a tax credit to each person who would exercise his right to vote in a provincial election. The money disbursed for these grants would be easily recovered through an increase in government efficiency through greater voter turnout.

For the sake of transparency, all expenses incurred by MPs and their staff should be proactively published on a web portal so that voters and journalists can be informed of how public money is spent by our representatives.

In our opinion, provincial deputies should be as accessible as municipal councilors. That is, all municipal advisors should hold a citizen meeting every month to answer questions from the public. If elected, the candidates of the Green Party of Quebec commit to holding such meetings in their constituency every month.

Debates in the National Assembly are often very uninteresting and large political parties have difficulty finding relevant topics for debate. At present, only MPs can introduce bills and initiate debates on legislation. In order to make the National Assembly more dynamic and more open, we propose to allow citizens to introduce bills as a result of obtaining signatures. This could force major political parties to position themselves on bills that come from the people rather than from their own political party.

SENDING THE POLITICAL PROGRAMS TO THE ELECTORS

During elections, the ability of political parties to join the elections and promote their programs varies according to their financial means. To counter this inequality, we propose to mandate the Director General of Elections to include partisan information on the course and program of each candidate in elections. This information could be sent to households with the convocation of the vote and the list of candidates. France already operates with such a system and the DGEQ recommended the implementation of this policy in its most recent annual report.

SIMULATION OF ELECTIONS IN ALL PRIMARY AND SECONDARY SCHOOL

Across Quebec, some secondary schools hold similar elections at provincial and federal election meetings. These simile elections are important pedagogical tools that allow students to analyze issues, electoral platforms, candidates and parties before having to make a political choice. In addition to understanding the functioning of the electoral system, these students would be inclined to vote and have developed a critical analysis of electoral programs. We therefore propose to implement the similar elections for each elementary and secondary school in Quebec during federal, provincial and municipal elections.

In Quebec, thousands of students finish high school every year with very little knowledge of how our democratic system works. Therefore, we propose to implement a civic participation course per week from the first to the fifth year of secondary school.

SUPPORT FOR THE LOCAL AND NATIONAL MEDIAS

In Quebec, local newspapers are fewer and fewer. The national media has imposed significant cuts that leave citizens with less and less quality information. This reality, caused by a decline in advertising revenues in the digital age, must be addressed by the state. The Green Party of Quebec supports the establishment of a media fund that will be used to subsidize local and national media that offer quality information to citizens.