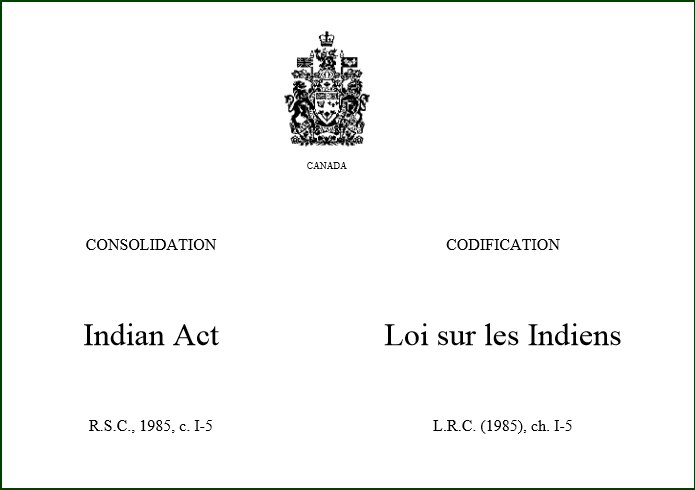 Montreal, February 24th 2020- Despite all the media hype surrounding the Wet'suwet'en situation, one central notion seems to be systematically avoided: band councils.

Regardless of the multinational corporation that have to negotiate with the Aboriginal nations, they all boast of having received the agreement of multiple band councils. These negotiations would, according to the CEOs, ensure the legitimacy of their intrusions and exploitation on aboriginal territories.
It is therefore time to take a look at this decision-making body with its dark past in order to better understand its origins and its lack of legitimacy.

Band councils are not a traditional method of political organization. They are the result of the Indian Act of 1876. This Act, imposed by the Government of Canada, radically changed the way Aboriginal decision-making bodies functioned. It introduced a typically Western way of operating, including elections based on the dubious democratic standards of the time.
These new decision-making institutions would then become the main interlocutor with the Government. In this way, Aboriginal social and political management would become rooted in the Western democratic and paternalistic tradition centered around the white man's ownership of land.
The Act set aside all Aboriginal decision-making traditions. In fact, women, who then had a central role as clan mothers, were set aside.
This effort reflected the settlers' misunderstanding of the very fluid and changing organization of Aboriginal bands. The imposition of a central body reflects the settlers' desire for simplification in order to facilitate the takeover of Aboriginal communities, their territory and the resources within it.

Operation
Band councils, available to each band, are composed of a chief and councilors. Council members are generally elected for a term of two to four years. All Aboriginal people 18 years of age and older have the right to vote, regardless of whether they reside on or off the reserve. The basic function of the council is to represent the band to the federal and various provincial governments.
However, its roles are multiple and go well beyond the authority of municipal councils. In fact, these band councils provide all the benefits to which Aboriginal people are entitled. They manage the school system, their justice system, and the health and social services system. They also have authority over the conservation of flora and fauna as well as over the development of urban planning in their communities.
All of these functions make the band council the main employer on reserves.
Band councils do not, of course, collect taxes.  In fact, they depend almost exclusively on federal transfers, which raises doubts among many Aboriginal people as to their decision-making independence.

Legitimacy
The creation of band councils represents a clear objective: the abandonment of Aboriginal lands by those who live there.  This is the central function of these institutions, which from their inception were intended to transform the traditional political mode of operation in order to ensure the control of government.
However, these band councils, although they have many functions, are far from being the only authority on reserves. The Aboriginal cultural and political heritage has been able to survive multiple government attacks, as demonstrated by the outpouring of solidarity with the hereditary Wet'suwet'en chiefs.
Thus, Aboriginal authority is diverse, contrary to what the government of the CAQ, the LPC and the many extractive companies are trying to make us believe. Consequently, negotiating with an Aboriginal authority does not ensure the legitimacy of a project.
Moreover, band councils are often seen by Aboriginal communities as perverse tools of government authority. For some, they are simply subject to federal authority since they must apply the mandates and directives of the Department of Aboriginal Affairs. The cynicism surrounding these bodies translates into council elections where public participation is simply derisory. According to the demonstrators still gathered in Kahnawake: "Very few people participate in the election of these councils.... These councils do what the Canadian government tells them to do. »
All in all, band councils are, at best, an instrument for scrutinizing government actions in order to ensure that their commitments to their communities are respected. More realistically however, the band council is a practical tool for the federal and provincial governments, as well as for big business, to impose their authority.
If there is one thing to remember, it is that the authority and legitimacy of Aboriginal authorities is diverse and complex and that band councils alone cannot approve or refuse a project. Only broad and good faith consultation can ensure the legitimacy of a project.