A look back at the burdensome history of the Aboriginal Canadians.

An article from the spokesperson in Indigenous Affairs, Catherine Richardson. 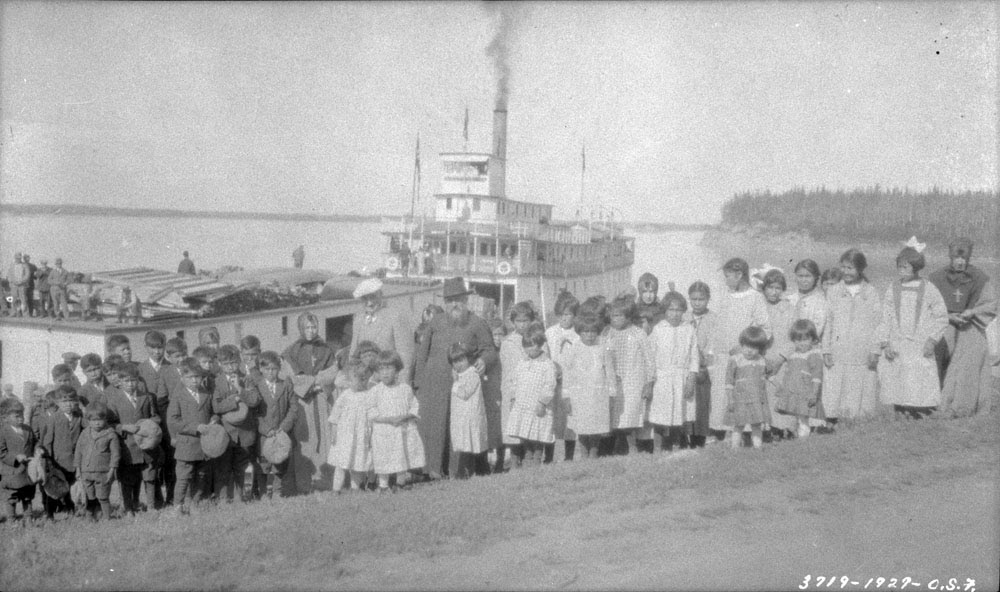 Title of the exhibition:Where are the Children? Healing the Legacy of the Residential Schools. Conservateur: Jeff Thomas, Archives nationales du Canada, Ottawa, Ontario.

Montreal, February 14th 2020- Recently, the Segal Centre ran a powerful and poignant play dealing with the subject of children’s resistance to oppression and mistreatment in an Ontario residential school.

The reality that Canada interned over 150,000 Indigenous children stunned audiences, many of whom had just learned about this travesty. Jointly with the activists Vicky Boldo and Nakuset, we worked at the theatre offering emotional support and facilitating talkbacks.  The question posed to audiences was “Now that you have heard this story, what can you do about it?”

Let me offer some context to this massive family destruction policy. Forcibly and legally separating Indigenous children from their parents was only one of many brutal and violent strategies to suppress resistance in Indigenous communities.  The anticipated resistance would be, of course, in response to land theft, the reduction of traditional territories, the development of enclosures (reserves) and the development of mining on Indigenous lands.  The Sixties Scoop carried on where residential schools left off.

The Canadian government had implemented the Indian Act in 1876, which gave the government and its Ministers power and control over virtually all aspects of Indigenous life.  It was and still is an apartheid-like piece of legislation designed to facilitate the “transfer” of land, and all the resources (minerals, gems, fossil-fuels and so called “real-estate) into the hands of the Government, land companies and then to European settlers. In order to enact this massive land theft, the Government relied on myths and stereotypes about the superiority of Europeans and the inferiority of Indigenous peoples and relied on discourse of “benign Christian intent” to valorize their genocide.

Of course, many Indigenous communities were virtually destroyed when the children were taken away.  Families were lied to and parents were imprisoned for trying to stop this terrible theft.  Canada tried to destroy everything that was sacred to Indigenous families.  After the searing pain of experiencing the removal of their children as young as four years old, alcohol was introduced to communities to further promote social unravelling.

In terms of the Indian Act, there were amendments along the way.  In 1936, responsibility for Indigenous people was transferred from the Ministry of the Interior to the Department of Lands, Mines and Resources, demonstrating the power of the extractive industries to guide policy and further the destruction of the Earth and cultures.

Upon learning about an upcoming Treaty settlement in the prairies, two bankers started the Saskatchewan Valley Land Corporation.  This company was poised for profiteering, and bought up the recently stolen land, flipped it and became incredibly wealthy.  Ironically, this Indigenous land was referred to as “surrenders”.  More of this history can be traced in an unashamed book called “Merchant Prince: The Story of Alexander Duncan McRae.”(O’Keefe & MacDonald, 2001).  With the land theft cash, these two bankers became industrialites, beginning the logging industry on the west Coast of Canada, as well as mining and fisheries.  This book is an unabashed piece of colonial discourse, presenting the prairies as being devoid of inhabitants (my relatives were living there).  No real mention is made of Indigenous peoples, colonial violence and genocidal practices.  However, it does point out that 90% of the board of directors of the Saskatchewan Valley Land Company were members of the Canadian parliament.

In relation to Quebec, there were 11 residential schools.  Further, even the term “residential school” is an artefact of colonial discourse and should be more accurately referred to as “prison camps for Indigenous children.”

To Canada’s great shame, some of these institutions had a death rate of over 60%. There is an infamous interaction where Deputy Superintendant of The Department of Indian Affairs Duncan Campbell Scott is informed by Chief Medical Officer Dr. Peter Bryce that over 60% of these children are dying.  He demanded that the schools be closed.  Scott replied that the project would not be finished until there were no more Indians in Canada.  Researcher Kevin Annett discovered archival materials that showed healthy children being placed beside children who had tuberculosis, which constitutes an act of genocide.  Many of the residential schools have unmarked graves below their floors, the remains of children who died, who were killed and babies who were conceived, through the sexual assault of minors, within the walls.

Even when Canada attempts reparations, like through the Common Experience Payment process, there is no acknowledgement of the suffering of parents, mothers, in this experience.  Perhaps this relates to Canada’s sentiment that these are “our Aboriginal children” and, as today in the child welfare system, parents are seen as disposable.  After years of working in the Yukon as a community counsellor, I witnessed that many elders died before ever receiving any reparation or compensation for the losses and abuses endured at the hands of the Government and its religious employees.  Their suffering was enormous.  And no, we were not doing the best we knew how to do at the time.  The opposite.  Britain and other imperial powers had been colonizing the planet and the murder and destruction was apparent.  It has been noted that Britain probably owes India the equivalent of 45 trillion pounds.

The main things to know about Canada’s colonial violence and the Indian Act are these:  Indigenous people resist their oppression, meaning the government must become more skilled and clandestine in their approaches to land theft.  We see this through the crushing of protest in relation to oil and gas expansion on Indigenous lands.  At the peak of the residential school era, there were about 80 schools operating in Canada. There were a total of about 130 schools in every territory and province except Newfoundland, Prince Edward Island and New Brunswick from the earliest in the 19th century to the last, which closed in 1996.  However, the removal of Indigenous students from community to stay in residences to receive a high school education is ongoing in many northern locations (Northern Ontario, children move to Thunder Bay).  These practices are unsafe and even in Thunder Bay, it has been revealed that the bodies of many Indigenous young people are found in the river.

The police have not cared about these deaths (see source below).  Perhaps the most important thing to note is that these “land clearances” are all related to mining and fossil fuel extraction.  Pipelines, toxic waste dumps and tailing ponds tend to be situated in or near Indigenous communities (See below).  My own family was exposed to radiation in Uranium City, during the Cold War.  I won’t go into our collective health issues.  Prime Minister Lester B. Pearson approved of the mass extraction in northern Saskatchewan, where one third of the world’s uranium fuelled the Cold War.  The material for the bombs that the US dropped on Hiroshima and Nagasaki came from near Delane in the Northwest Territories.  In Delane, every single First Nations man working for the company died after being lied to about safety issues (See the NFB film, The Village of Widows).

So, how does this relate to Indigenous children and residential schools?  The churches were providing a function for the state in the attempted destruction of individuals and communities.  There are few priests and nuns in prison today for crimes against children, crimes that would be surely prosecuted if they had been enacted on middle class white children with powerful parents.  Today, child welfare fills the role of the residential school, with Indigenous families being targeted; over 60% of the children in government care are Indigenous in many provinces.  Quebec has some of the least progressive practices in Canada in regards to following the recommendations of child welfare researchers.  The ongoing attack on Indigenous families paves the way, across Mother Earth, for the dangerous development of pipelines, in spite of the research by climate change scientists who warn us we must keep it in the ground.

Recently, Member of Parliament Romeo Saganash accused Prime Minister Trudeau of “not giving a fuck about us”.  While that may or may not be true, many Canadians, including Mr. Trudeau, confuse being cordial to a few individual Indigenous folks while leaving intact the structural violence and racism that inhibits and disadvantages Indigenous people in their efforts toward life and self-determination.  The colonial institutions that harm and limit us, often through racism (police, child protection, Corrections Canada, the public school system).

Today, it seems we can’t keep developers out of Kanesetake. We can’t address sexualized violence by police in Val D’Or against Indigenous women.  In Canada the prosecution rate for sexualized assault against women is less than 1%.  And, Canada lacks the political will to reduce fossil fuel development.  And, don’t even get me started on the over 3,000 murdered and missing Indigenous women and the apparent impunity for killers in Canada (Who are the perpetrators?).  As the Green Party of Quebec we need to protect the earth and align with the Indigenous communities who can take the lead on land stewardship and the advancement of ethical industry.

So, to the Segal Centre and the cast of “Children of God’, thank you for letting your hearts break open, every performance, for three weeks, for the near thankless task of settler education.  It will make a difference, eventually.

This piece was written on the lands of the Kanien’kehà:ka, in Tiohtiá:ke.