Vincent J. Carbonneau - Candidate of the Green Party of Quebec in Mont-Royal-Outremont - 2018 Elections

Vincent J.Carbonneau proudly wear the colours of the Green Party of Quebec in Mont-Royal-Outremont, to defend the environment and social justice and to give them the place they deserve in the public debates. 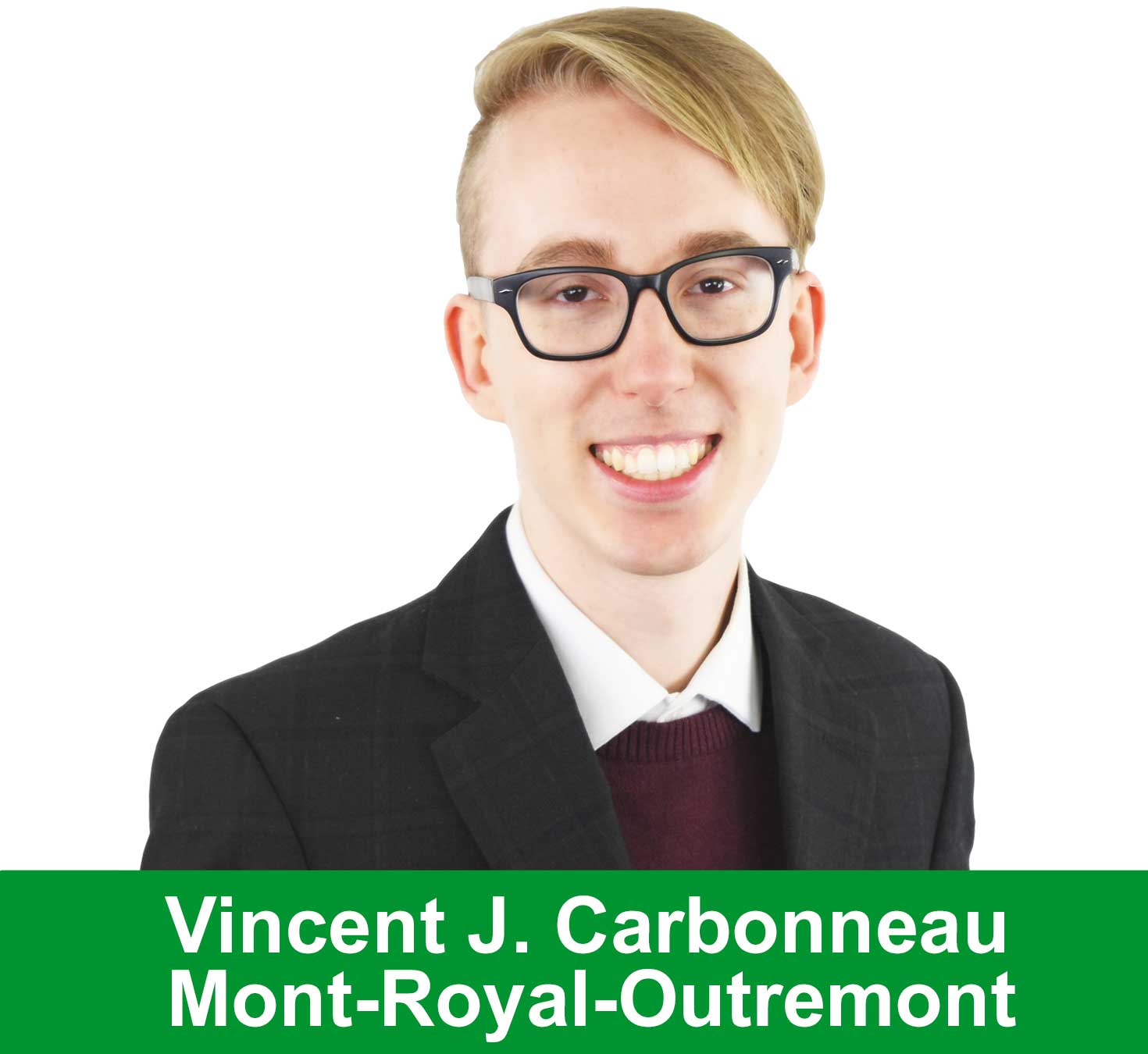 Law student at the University of Montreal and environmental activist, Vincent J.Carbonneau will proudly wear the colors of the Green Party of Quebec, to defend the many environmental and social justice issues and give them the place they deserve in the public debates . At the age of 24, they believes that a progressive society project is possible in the province right now.

Having already been a candidate for the greens at the provincial and federal level, it is with strong political experience that this young activist is now in the riding where they continues their studies.

Vincent observes a real negligence of the Quebec government in environmental matters; that is why they feels an urgent need to intervene, because none of the three major parties has demonstrated their willingness to make this issue a priority. Climate change represent a significant threat, which pushed them in 2011 to become actively involved in the green movement.

Justice is of great importance to them; they fights for better defense and recognition of the rights of marginalized people, indigenous people, sexual and gender minorities, cultural and religious. For them, the Quebec of tomorrow is an inclusive one, where everyone should have the same opportunities and the same rights.

In the past, Vincent acted as a mobilization agent for the environmental organization Pro-Vert Sud-Ouest and then continued their activism in the Green Party as an organizer and communications officer. He is currently involve in his university, particularly in the environment and diversity committees of the Faculty of Law as a coordinator and representative of the 2nd year, as well as in the group Action justice sociale - UdeM. A great lover of culture, he also have a degree in history.

If Vincent is elected on October 1, 2018, he agrees to hold a constituency public meeting to hear the electors once a month for the duration of his term, to give 25% of his salary to community organizations, to ensure the transparency of its expenses in its functions and to create a platform for the transmission of ideas for the citizens.

For Vincent, every vote cast on behalf of the Green Party of Quebec demonstrates that the values, proposals and ideas defended by the party resonate with the population and helps us to take the place in the public debate, they would be honored to be able to count on your support during elections. Every vote counts!


To contact Vincent J.Carbonneau, please contact the Green Party of Quebec at (514) 612-3365 or by writing to info@pvq.qc.ca